Concerns About Your Poly-B Pipes and Leaking In Your Home?

Are you aware of the piping that your house has? Most of the time, we don’t even think about our household plumbing. As long as you’re getting warm and cold water from your pipes, you essentially don’t have to think about it. But, if your house happens to have Polybutylene (Poly-B) pipes, you’re going to want to know more about the damage it can – and possibly has already – caused.

Calgary homes built in the 80s and 90s have a rich history to them. While there’s something special about buying a house built before the 2000s, there is a high chance that these homes have Poly-B pipes. To this day, about 25% of Calgary homes still have Poly-B piping.

Poly-B pipes were a holy grail of pipes before the 2000s. They were cheaper than copper and easy to install. Even so, homes with Poly-B pipes have experienced problems since their inception – like leaks within the walls of houses. The unfortunate truth is that Poly-B pipes are notorious for leaks, and because of their material, they will only get weaker over time.

Every homeowner’s nightmare is a leak going unnoticed. Because your plumbing is typically hiding within your walls, you won’t even notice a leak until it is too late. Eventually, these leaks progress into a mold and can present serious safety concerns within your home.

So, How Do You Know If You Have Poly-B Pipes?

While most of your plumbing may seem hidden behind walls, you’ll always have access to some exposed plumbing throughout your house that can identify whether you have Poly-B pipes.

Check under your sinks or by your hot water tank for grey plastic piping. Sometimes they may also be greyish blue color, but there’s a good chance you’ll find a grey one. If you’re lucky, you may even be able to identify the pipe if it happens to have a “PB” marking on it. 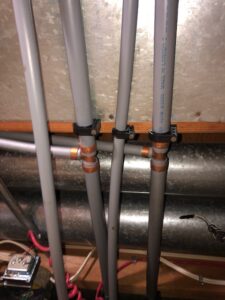 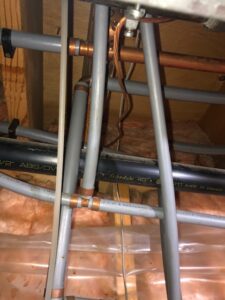 Do I Need To Be Replacing My Poly-B Pipes?

You absolutely should be identifying and replacing your Poly-B pipes immediately. There are lots of risks associated with these pipes. They are prone to developing cracks, which lead to leaks and, ultimately, molding in your home.

The good news is that you can replace your Poly-B pipes for far less than you might expect. Which, in the long run, as a homeowner, changing your Poly-B piping will make your home safer, more valuable, and will be easier – and even less expensive – to insure.

Are you interested in making the decision to protect your home, and your safety, by replacing your Poly-B pipes?

Stop Getting Soaked by your Plumber